4 Facts You Need to Know About the AG10 Battery

Small button cell batteries like the LR54, LR1130, L1131 and AG10 batteries are designed to power your small devices like watches, calculators, toys or car keys.

In the spotlight today: the AG10 alkaline button cell.

Here’s what you need to know about AG10, 1.5V alkaline button batteries.

The AG10 has the alkaline chemistry of a non-rechargeable primary cell. It works through the reaction between the cell’s two electrodes: zinc and manganese dioxide (MnO2).

The electrolyte is made of a metal salt called potassium hydroxide.

So, why is it non-rechargeable?

That means the product of the reaction must be broken down into the same substances from which it was formed.

If A+B =C, then in the backward reaction, C must break down to produce A and B.

However, with this type of alkaline battery, The zinc/manganese dioxide reaction that produces the cell’s chemical energy can only be reversed before it reaches 40% discharge.

After the first 40%, the reaction becomes more complicated and can't be reversed.  This is because the Hydrogen ions (H+) that are formed will bond with the Manganese oxide (MnO2) to create a non-reversible compound referred to as groutite (MnOOH).

Since groutite can not be broken down into MnO2 even after the Hydrogen ions are removed, there is no way to restore the charge of the alkaline battery.

If you do attempt to recharge it, there is a risk that the cells will explode because of all the gas that will accumulate inside the seal.

The nominal voltage on AG10 batteries is 1.5 volts and they discharge at a continuous rate with a high cut-off range. During the discharge, they have:

Plus, the batteries have a capacity of 70mAh, meaning they can supply 70 milli-amperes of current for one hour.

The charge is sufficient enough to give enough power to your small gadgets for a long time. Most of these small gadgets have an energy capacity of 1–5 milli-amperes, so 70mAh typically lasts a while.

The exact battery life will depend on how much power is drawn by the different gadgets plus the operating temperature.

During the reaction, the potassium hydroxide electrolyte does not participate. Since it remains unused, the battery can maintain the same power output for longer.

In addition, these alkaline button AG10s have a slow rate of self-discharge. If stored at the right temperature, they can last for up to three years in storage. After which, they'll still provide the same power output when you use them.

The AG10 Is Small and Portable 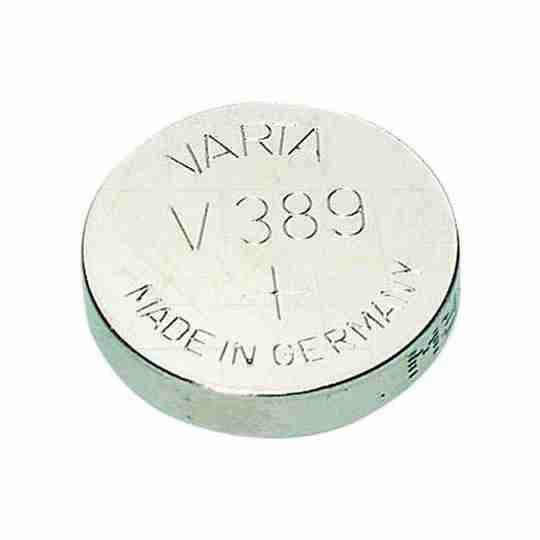 AG10 alkaline button batteries are tiny and disc-shaped; they look like small buttons, hence the name. They measure 11.6 mm by 3.1 mm with a weight of roughly 1 gram.

Because of their small size and low weight, they can be used on small and miniature devices like calculators, toys and watches.

They weigh so little that using these cells in a series in a device won’t affect the gadget’s weight. Their size and weight also make them easily portable and suitable for travel or outdoor trips.

Caution: These alkaline button cell batteries pose a choking risk to children under the age of 3 years. So take every precaution to ensure that you keep the ones you haven’t used in their original blister pack. And keep them away from the reach of young children.

Also, double-check all toys to ensure the screw on the battery compartment is tightly sealed and secure. If for any reason, you can’t access AG10s, you can turn to various other replacement options with similar composition and size.

The table below shows some of the main AG10 1.5V replacement options.

Other compositions are also not excluded from replacing AG10s. You can opt for higher capacity silver oxide batteries like the 389 or SR1130.

Why is my alkaline battery leaking?

The potassium hydroxide electrolyte in the batteries may cause them to leak on occasion. Leaks may occur when:

If you notice a leak, it’s best to remove the battery immediately. You need to wear gloves and watch out for skin damage because the electrolyte is caustic.

Once you’ve removed each cell, swab the device’s battery compartment with an acidic substance to neutralise the alkaline hydroxide electrolyte. You can use any household acid like vinegar.

Remember to seal the battery in a plastic bag if you are disposing of it with the rest of your household waste.

Is an AG10 button cell battery the same as a VG10A alkaline button battery?

AG10 and VG10A are one and the same thing. The two designations are used for alkaline batteries used in small gadgets like watches and toys.

The size, dimensions and specifications on both are the same. What one manufacturer calls AG10 another refers to as VG10A. So, you can use the two names interchangeably.

If you are looking for the AG10, we have what you need. HB Plus Battery Specialists can satisfy your household and bulk orders— no order is too big or too small for us.

Plus we’ll guarantee fast delivery with first-class service. But don’t just take our word for it; here’s what others had to say:

Brilliant! Ordered and received to Rural Victoria within a day. Great battery. Thank you, Julian C.

My go-to for affordable batteries for my mum's radio. Thank you for being efficient when required. Laura B

The purchase process was very quick and smooth, and the delivery was very prompt. William R

Our Varta Brand AG10/VG10A  is sold in a one-pack blister cell at an affordable price. If you also need the nearest replacement option or a bulk pack, get in touch with us and we’ll make a suitable arrangement.

Buy your portable, alkaline AG10 One Pack from